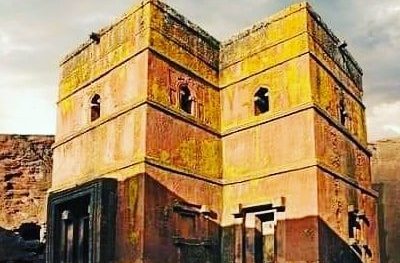 Many destinations are described as being “a step back in time” for travellers – but in Ethiopia you can take this literally. The Ethiopian calendar is seven years and nine months behind our own. The timeshift is perhaps the first indication that you have arrived somewhere very, very different – but it is not the last. The senses are bombarded with “otherness” in Ethiopia, from the sight of the strange, calligraphic script to the eerie sound of Orthodox chants mixing with Islamic calls to prayer, and the fiery flavoured stews served atop giant, sour pancakes.

As you traverse from North to South, past the sunken rock-hewn churches of one of the world’s oldest Christian nations, through the verdant, lake-splashed Rift Valley, glimpsing the strange, endemic wildlife of the highlands, reaching the clay and ochre-smeared tribes of the Omo Valley – Ethiopia’s uniqueness is inescapable and overwhelming. Our Ethiopia travel guide leads you along the ancient trails of this little understood nation.

Islam’s fourth holiest city covers just a single square kilometre in eastern Ethiopia, in this walled citadel with over 80 mosques and 360 labyrinthine alleyways dating back up to 1,000 years. The elegant Islamic architecture, colourful robes and ancient markets seemed to have altered little since then. One of Harar’s main draws is the feeding of the hyenas, a nightly ritual which deters the predators from attacking livestock.

Africa’s Great Rift Valley rips a great scar through the middle of Ethiopia, where lakes have bubbled up and forests have sprung from the ground. The warmth and humidity are a welcome break from the harsh highlands, and journeys up and down the valley reveal a variety of cultures and traditions, where life revolves around market days, traditional ceremonies, farming and weaving – all scarcely touched by tourism.

It is possible to see lion, buffalo, hippo and zebra in Ethiopia, but those after a traditional East African safari experience will be disappointed. What Ethiopia does best is uniqueness, and this extends to its fauna. Gelada baboons, Ethiopian wolves, mountain nyalas and even the comical, big-headed mole rat can all be found roaming the isolated highlands – rare, fascinating and totally unique to Ethiopia.

Local musicians and influences from the diaspora have created a strangely seductive blend of African rhythms, Middle Eastern melodies and traditional Ethiopian folk sounds fused with jazz – the krar being the most distinctive instrument. You’ll hear plenty of it on the car radio, but if you can get to a cultural show in Addis, you’ll see the madly energetic dance that accompanies it.

These 11 rock-hewn churches – up to 13m high – were created in the 13th century, and are the closest thing Ethiopia has to a ‘big’ tourist attraction. They were freed entirely from the rock with just hammers and chisels, and are complete with elaborate windows, columns and roofs. Lalibela remains very much a living cultural site; 1,000 of its 10,000 residents are priests, and the churches are the focal points for ceremonies, vigils and processions.

The jagged peaks and deep gorges of this mist-shrouded national park are home to Ethiopia’s most striking wildlife: gelada baboons, Walia ibex and lammergeyer vultures. Millions of years of erosion has created a jaw-dropping landscape, recognised by UNESCO. Surreal Afro-Alpine cling to the steep slopes, over 3,600m high. Single or multi-day treks with local guides offer an insight into life on the ‘roof of Africa’.

A trip to the Omo Valley is to discover the Africa of old, of warrior tribes and pastoralists, or body adornments and blood-drinking hunters. But to go beyond the tourist shows, stay in a community tukul in Konso or Dorze, visit the colourful markets of the north, join a frankincense-scented coffee ceremony and trek the highlands with a village guide.

Using a local guide doesn’t just mean someone from Ethiopia; in a country with dozens of languages, cultural traditions, varied religions and local festivals, you really need a new guide in each place you visit. In Lalibela, local guides know the history of the churches by heart, while in the Omo Valley they can chat to the tribes to avoid cultural conflicts and encourage interaction.

Africa’s highest capital is a largely modern city, but not in a ‘good’ way. It is filled with blocky, half-finished buildings, chaotic traffic and the sounds of construction. If you’re passing through, though, don’t despair; on arrival, the National Museum provides a fantastic historical introduction to Ethiopia – dating back 3.2 million years, and before departure the Merkato and craft stalls are great places to spend your last birr.

Search for images of the Blue Nile Falls, and you’ll see a stunning, smaller version of cascading greats such as Victoria Falls or Iguazu. So visitors to the falls today may be confused to encounter a muddy trickle. The damming of the river for a hydroelectric plant now cuts off the flow most days; rumour has it that it’s left to flow on weekends, but this doesn’t seem reliable. August and September see the strongest flows.

Living with a tribe

The tribes of the Omo Valley are fascinating, but interacting with the daily tide of visitors is, for them a day job. You can’t expect to stay in a local village or join a local festivity any more than you would in any other country; these people have livestock to tend to and lives to lead, and for the most part, they’d like to keep some aspects of their lives private from camera-wielding tourists.